Northern Rhône native, Alain Graillot, is recognized for his passion of Syrah. Prior to starting his own domaine, Alain worked in Burgundy, where he received guidance from the reputable Jacques Seysses of Domaine Dujac. In 1985, Alain founded Domaine Alain Graillot just outside the village of Pont de l’Isère, about 6 km south of Tain-l’Hermitage. He is now considered one of the most highly sought-after producers in the Northern Rhône due to his exuberant, robust and impeccably made Syrah-based wines.

The family owns 22 ha of vineyards made up of 30-year-old vines in Crozes-Hermitage that are planted on well-drained, flat alluvial plains between the Rhône and Isère Rivers and two small parcels of 12-year-old vines in St. Joseph planted on hard, granite slopes that produce a slightly fresher, easy-drinking wine. Total plantings include Syrah for reds and Marsanne and Roussanne for whites. The vines are farmed organically with traditional chemical-free vineyard management techniques, and all fruit is hand-harvested and respected based on its expressive terroir.

Beginning with the 2008 vintage, Alain’s son, Maxime Graillot, owner of Domaine Equis, took on the role of running his well-respected father’s Domaine in addition to his own. The red wines that Maxime produces under his father’s label maintain a traditional appeal of using stems and whole-cluster to add structure and longevity.

“This is the style of wine I personally want to do - not too high in alcohol, with freshness and fruit.” - Alain Graillot

All the grapes are hand-harvested, from severely-pruned, low-yielding vines. On arrival at the cellars, the white grapes go straight into the pneumatic press. After settling, 50% of the must is fermented in barrel (one year old oak bought from top Burgundy producers such as Sauzet). The other 50% is given a long, cool fermentation in stainless steel tanks, with temperatures controlled at 18°C. Graillot deliberately avoids malolactic, thus preserving acidity, and blends the components at the end of the winter. The wine is sterile filtered and bottled in April or May following the vintage.

The red Crozes-Hermitage grapes are not destemmed. They are loaded into lined concrete vats, and temperatures are brought down to 18°C for a 2 to 5 day pre-fermentation maceration. Once vinifications get going, temperatures rise to 30°C, and cuvaison lasts 15 to 21 days. The young wines are aged for one year - 80% of them in one to 3 year old oak barrels, the remaining 20% in vat. They are given a light filtration but no fining before bottling. The "La Guiraude" cuvée is not a specific terroir, but a selection of the year's best lots, chosen after Alain has tasted every barrel.

The Saint-Joseph is made the same way as the Crozes, but from destemmed grapes. The Hermitage grapes are also destemmed, and then fermented in a small, shallow vat with pigeage by foot. The wine is aged in one year old oak for 12 to 18 months. 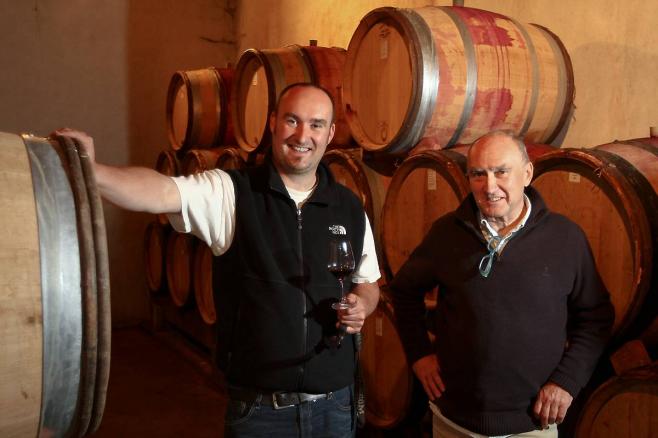